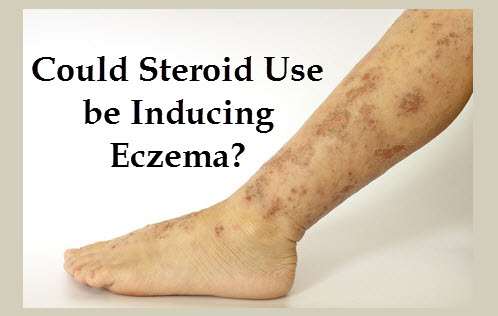 When you go to the doctor to get help for your eczema they often prescribe a steroid cream to help get it under controlled. Although a steroid cream is effective in the short term, the long-term side effects can not be ignored, and can even cause your eczema to worsen. Steroid Induced Eczema is also referred to as Topical Steroid Addiction. Here are some signs to tell if you have Topical Steroid Addiction:

It is not clear what actually causes the topical steroid addiction. There are several good hypothesis to describe this problem, but nothing concrete has been establish to explain the withdrawal process from steroid creams. Most often people are not made aware of the dangers of steroid cream when they are prescribed and therefore they do not use the caution necessary to prevent the withdrawal symptoms.

What Can Prevent Steroid Induced Eczema?

Use extreme caution when using steroid creams, and it’s best to avoid them if at all possible. EczeMate is the best alternative as it has no side effects, no withdrawals, helps heal the skin and is more effective than steroid cream for eczema.

What Do You Do If You Already Use Topical Steroid Cream?

Stop using the steroid cream immediately and start using EczeMate as soon as possible to combat your eczema symptoms, it should also be helpful to minimize the rebound effect of steroid induced eczema.

For more information including images look at Say No to Topical Steroids.